One of America’s oldest thriving heritage languages, Pennsylvania Dutch, is spoken by over 300,000 people, with some 20,000 speakers in Wisconsin alone. This project—involving students and colleagues from UW–Madison and other universities is dedicated to the collection, analysis, and dissemination of Pennsylvania Dutch texts and recordings for the benefit of scholars and the general public. Materials date from the early 1800s to the present, offering a fascinating view of American history from the vantage point of a unique cultural group.

Pennsylvania Dutch (Pennsylvania German) is an American language that developed through the migration of German speakers from Central Europe, especially the Palatinate, during the eighteenth century. Unlike most other heritage languages in the United States, Pennsylvania Dutch has survived for nearly three centuries without support from institutions or continued migration from abroad. Today, the language is spoken mainly by members of Old Order Amish and Old Order Mennonite communities, whose total population in the United States and Canada is approximately 300,000. That number is doubling every twenty years due to the large size of the average family and their low attrition rates, which assure the health of Pennsylvania Dutch into the foreseeable future. Until the middle of the twentieth century, however, most fluent Pennsylvania Dutch speakers were descended from immigrants of Lutheran and German Reformed background. Sometimes known as the “Fancy Dutch,” these Pennsylvania Dutch speakers were historically concentrated in the “Dutch Country” of southeastern Pennsylvania. 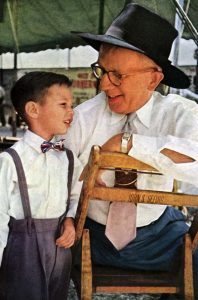 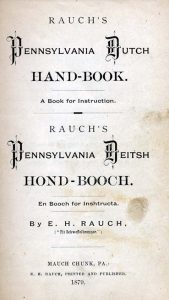 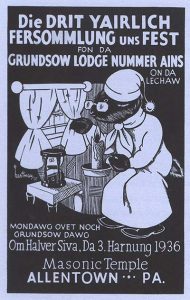 Pennsylvania Dutch speakers have always been bilingual in English, with many being highly proficient in both languages. In parochial schools serving Amish and Mennonite children, an “English-only” rule ensures pupils can become fluent in a language necessary for their economic success. The close contact between Pennsylvania Dutch and English has naturally led to transfer between the two languages. Some 10% to 15% of Pennsylvania Dutch vocabulary is English-derived, with most borrowings from English consisting of words for objects and concepts that would have been unfamiliar to the eighteenth-century ancestors of the Pennsylvania Dutch, such as motor, banana, and insurance. On the other hand, many words and phrases in the English spoken in Pennsylvania and beyond, such as schnickelfritz, the pie is all. and spritz the lawn are of Pennsylvania Dutch origin. An enduring stereotype of Pennsylvania Dutch people, which has been perpetuated by businesses that cater to visitors to the Dutch Country, is that they speak “broken” or “ferhoodled” (confused) English. While that was true to a certain extent of some speakers in the past, it is not true of most Pennsylvania Dutch today, who, unlike most other Americans, enjoy the benefits of being multilingual. 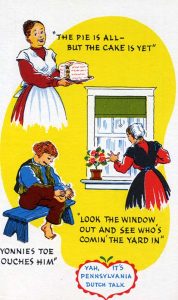 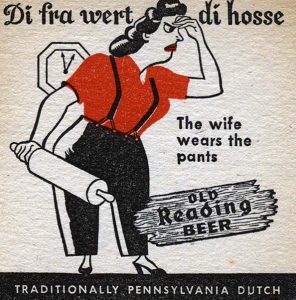