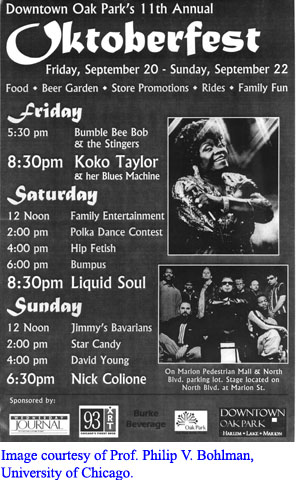 Soon after their arrival, German-speaking immigrants began organizing institutions around which community life revolved. These included businesses and trade organizations, music societies and sports clubs, religious congregations and freethinker organizations, mutual aid societies, and schools. While many of these local groups were ethnically homogeneous, they did not, for the most part, try to recreate “little Germanies.” They saw themselves first and foremost as members of their newly adopted American society.

Over the decades German traditions merged with those of other ethnic groups, and together they evolved into uniquely American regional cultures. Some German foods have become ubiquitous, but you are as likely to find a Bratwurst with cheese or jalapeños as the original variety. German is not widely spoken anymore, but German words and grammatical structures have crept into American regional English, as in the case when a Wisconsinite asks you “Do you want to come with?” And Oktoberfest is celebrated in many American towns as a fall festival that reflects old immigrant traditions as well as modern communities and cultures.