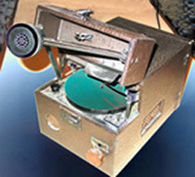 Lester Wilhelm Julius “Smoky” Seifert is regarded as one of the most significant figures in the study of German language and literature in North America. He was born August 15, 1915, in the village of Juneau, Dodge County, Wisconsin, a community founded in 1843 by immigrants from the Oderbruch in northeast Germany. Growing up speaking the Low German Oderbrüchisch dialect sparked a lifelong interest in German dialects and German-American Studies in North America. He received his Ph.D. from Brown University, writing a dissertation on the Pennsylvania German dialect spoken in the counties of Lehigh and Berks, and then enlisted in the Army during the Second World War. In 1945 he undertook post-doctoral research at the University of Wisconsin–Madison studying the language of Germans in Wisconsin. Beginning in 1946, Seifert began interviewing speakers of German, utilizing a Wisconsin German Questionnaire of his own devising, and recording these sessions on a SoundScriber (see image, right).

Audio of Seifert interviews, with transcriptions