After about 1830, millions of German-speaking immigrants arrived in this country, a migration which has significantly shaped contemporary American life and culture. This population was relatively literate and, in the century after this migration, a wide range of literature was produced across the United States in German for this audience, especially in the Midwest, Great Plains, and Texas. The Max Kade Institute for German-American Studies at the University of Wisconsin-Madison seeks to preserve and make accessible such German-language literature written in the United States, with an eye toward collecting as much as possible from a broad range of sources. 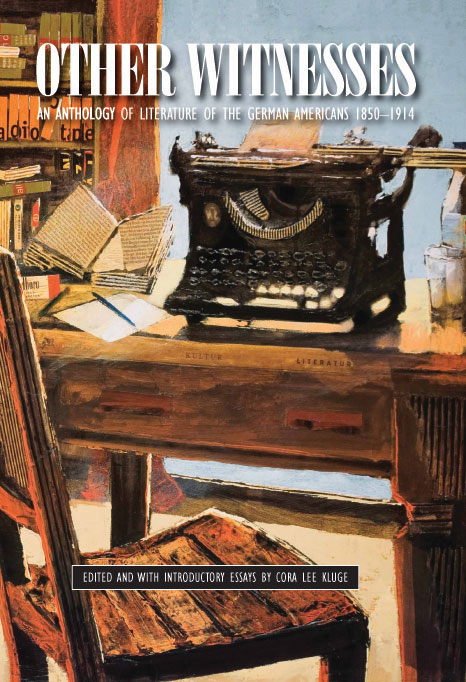 Kluge, Cora Lee. 2007 Other Witnesses: An Anthology of Literature of the German Americans, 1850–1914. Edited and with introductory essays. Madison. Max Kade Institute for German-American Studies.

The “other witnesses” represented in this volume are foreign-born immigrant authors who wrote in German of their experiences and insights. Their work provides today’s readers with a unique perspective and a new understanding of America’s growth and development between 1850 and the First World War. The collection includes poems, plays, prose fiction, reports, and memoirs by Christian Essellen, Reinhold Solger, Mathilde Franziska Anneke, Theodor Kirchhoff, Udo Brachvogel, Robert Reitzel, Julius Gugler, Lotta L. Leser, Fernande Richter, and others. Some of the works presented have never yet appeared in book form, and others are published here for the first time. Many have remained unknown, and all are difficult to locate. Introductory essays to each chapter provide biographical information, elucidate the cultural context, and point the way for further research.