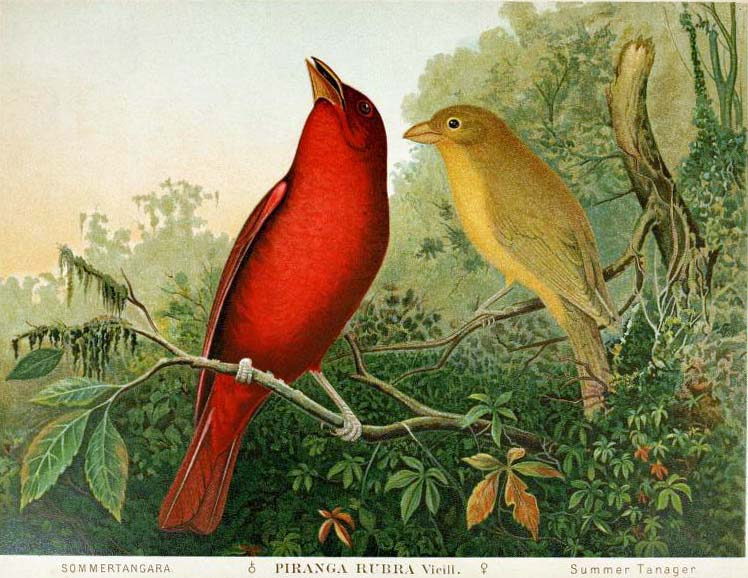 German immigrants arriving in America marveled at the different flora and fauna they encountered, which included many birds they had never seen before. Some were much bigger or more colorful than the ones they remembered from home. Others looked remarkably familiar, but their songs were different. And some didn’t sing at all.

One of the more beautiful items in the Max Kade Institute Library is Heinrich (Henry) Nehrling’s Die Nordamerikanische Vogelwelt (The World of North-American Birds), published in 1891 by George Brumder in Milwaukee. On 637 large format pages, the book describes one by one all the North American Birds that Heinrich Nehrling had encountered or read about, their habitat, as well as their interactions with humans—for better or worse. The volume is beautifully illustrated by Prof. Robert Ridgway from the Smithsonian Institution and National Museum in Washington, Prof. A. Göring in Leipzig, and academically trained artist Gustav Mütel in Berlin. In 1893, Brumder published an English translation in two volumes under the title Our Native Birds of Song and Beauty. 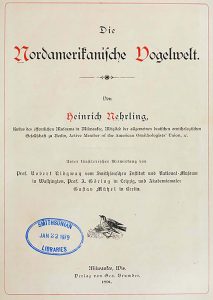 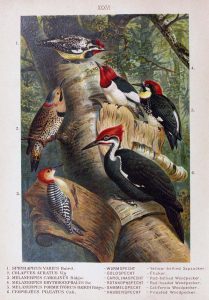 Henry Nehrling (1853–1929) was an internationally renowned ornithologist and horticulturalist born in Herman, Sheboygan County, Wisconsin, to German parents. From early childhood he loved poetry, the natural world around him, and above all the birds he saw. He had grown up with German songs and tales that praised the European landscape and its wildlife and was disappointed that the beautiful birds of rural Wisconsin did not get the same attention. Nehrling set out to change that with Die Nordamerikanische Vogelwelt, where he blended his own observations in nature with scientific descriptions of North-American birds, writing in beautiful prose and even poetry.

Nehrling starts out with the family of  “Drosseln” (thrushes), and particularly the “Wanderdrossel” (migrating thrush), more commonly known as the American robin.  Read Kevin Kurdylo’s partial translation of Nehrling’s section on the American robin in the MKI Winter 2007 Newsletter (attachment). A small selection: 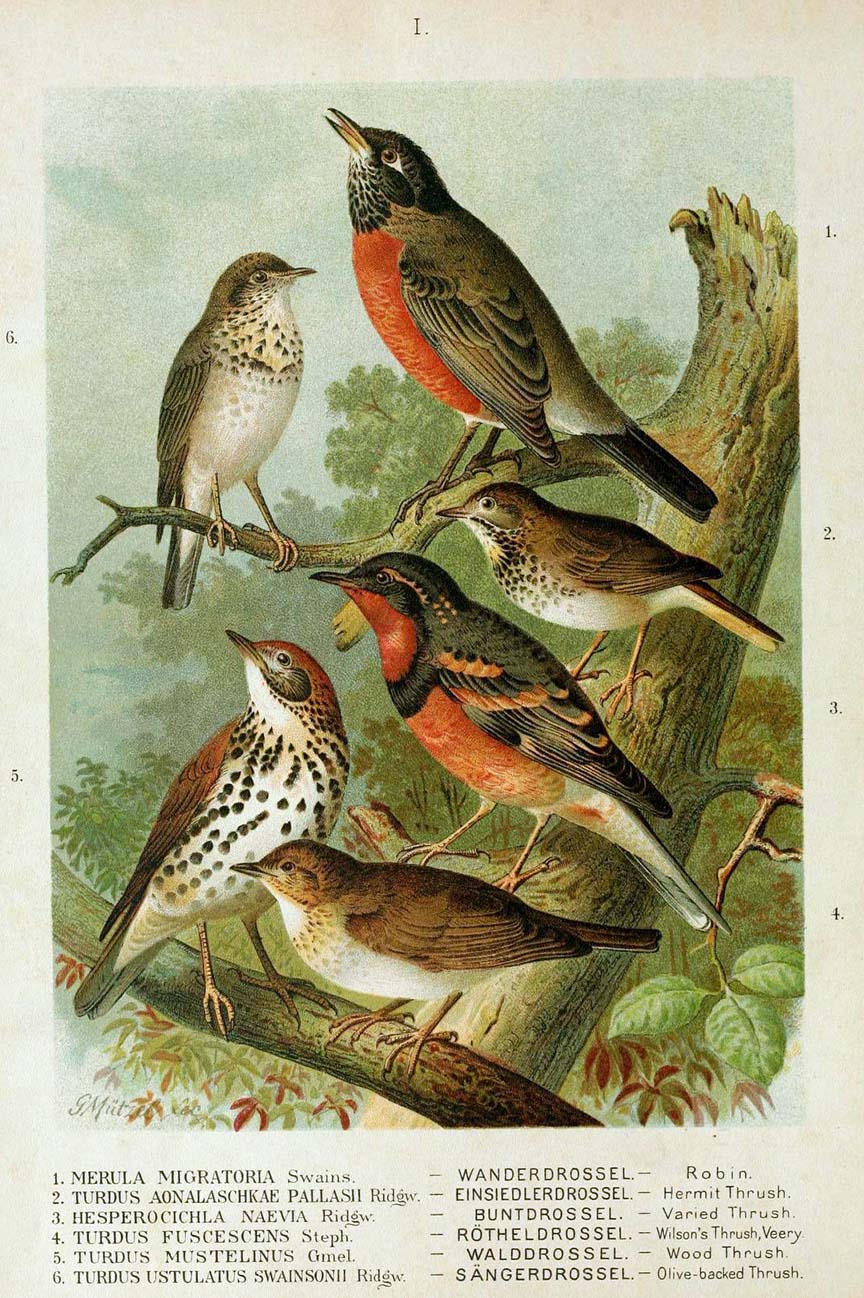 The first flowers of spring are still slumbering beneath snow and ice; the bitter north and west winds continue to rage and roar over the northern parts of our country. All of nature appears desolate, devastated. Only solitary feathered visitors of the north can be seen moving about among the low bushes. Kinglets, crossbills, and redpolls sway on the snow-covered branches of firs and spruces. Then, completely unexpectedly, a loud and jubilant song resounds from the top of a nearby elm. There on that beautiful dark-green silver fir sits another of these singers! The robins have returned home, and despite the ice and snow they sing with exultation to announce the approach of spring. […]

Perhaps none of the indigenous birds is so beloved of the American people as the robin. The first immigrants to Massachusetts, the “Pilgrim fathers,” named them Robins (or Robin Redbreasts), reminded of the wonderful robins of their English homeland. In the New England states the robin is highly esteemed and protected in every way. Because of this protection robins not only greatly multiplied, but also settled in large numbers in villages and cities. Few birds have so wide a distribution; they are found from the plateaus of Mexico to the northern polar region, from the shores of the Atlantic Ocean to the coast of the Pacific. None of the other thrushes can be found in so many areas.

In 1884, Nehrling moved to Gotha, Florida, where he planted a garden with over three thousand species of flowers, trees, shrubs, and vines. After a freeze in 1917 killed most of his plants, he relocated to Naples, Florida, and started a new garden there, which he named “Tropical Garden and Arboretum.” In both places he carried out pioneering work in plant hybridization and introduced non-native plants that have become staples in Florida gardens ever since. Nehrling loved the Southern landscape and its birds as much as the Wisconsin nature of his childhood. See how he introduces the “Mückenfänger,” the blue-gray gnatcatcher:

It was on a beautiful day in April in the year 1886, when I visited Lake Apopka in Florida. The magnificent deciduous forest along the shore was interrupted by groves of pines, dwarf palms, and low growing blueberries. These low-lying  areas are called hammock forests. There were also big oak trees, magnolias, tall palm trees, and many other Southern trees. Huge vines, lianas, and Carolina jasmine encircled shrubs and trees. At their base, beautiful ferns and orchids grew in abundance. Higher up you found Air Plants and Spanish moss. The lake’s murky water brimmed with fish. […]
The following day I spent at nearby Long Lake, a shallow body covered in water lilies. […] As I set silently musing on its shore watching the water lilies, I saw a pair of very small birds, briskly flying around and clasping on to the stems of tall reeds. Then they darted to a nearby tree, and to my surprise I discovered, only nine feet off the ground, the beautifully woven nest of the blue-gray gnatcatcher. 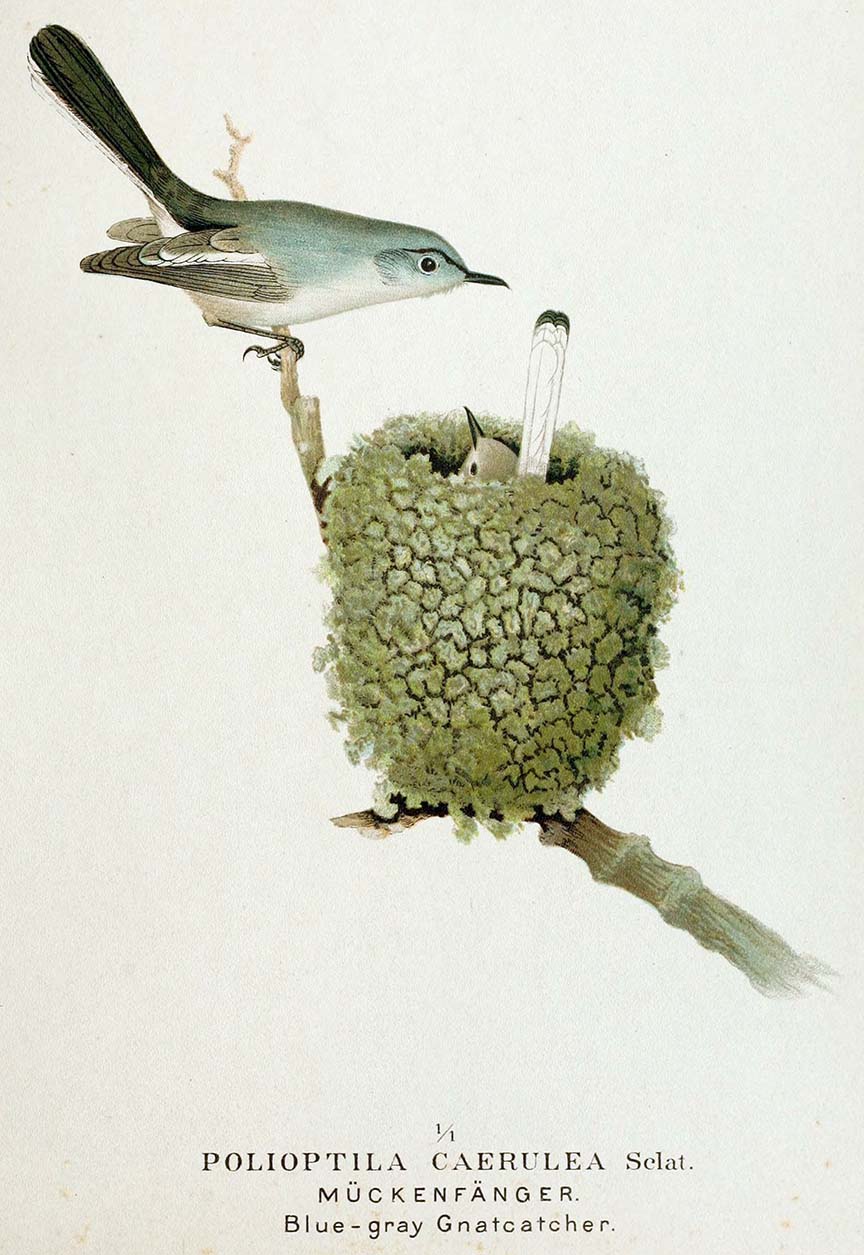 A unique aspect of Nehrling’s book on North American birds are entries on European specimens that people have introduced or tried to introduce in America. For example there is an entire chapter on “Die deutsche Feldlerche” (the German meadow lark). Writes Kevin Kurdylo in his above article:

“Nehrling comments that “the German, chieﬂy a sentimentalist, was ever aware that there are no suitable substitutions here for the birds of his homeland. With longing he thinks back to those times when the nightingale’s song permeated the grove, the rejoicing trill of the lark rang down from the blue heaven, and the ﬂuting tones of the blackbird, the love song of the blackcap, and the call of the chafﬁnch resounded from mountain and valley. This love for the old homeland and for the songbirds that brightened one’s younger days motivated the founding of so-called acclimatization societies [Einbürgerungsvereine] in several locales.” Despite objections raised by several prominent ornithologists, efforts to introduce German songbirds proceeded in Cincinnati, St. Louis, Boston, and New York. Of the many birds released in these venues, Nehrling reports that only goldﬁnches in Boston and New York, and perhaps also larks in some places, were successfully domesticated. However, the 1889 attempt to bring German songbirds to Portland, Oregon, immediately had quite different results. […] So many reproduced successfully that the European birds were found all over the state within a few years, and with the mild climate, many did not even migrate for the winter months.

As summer is around the corner and our parks are opening again, we hope that you, too, are able to enjoy the natural landscape and its birds. And we hope that one day in the not-too-distant future you will be able to visit the MKI Library again and see Die Nordamerikanische Vogelwelt with your own eyes.