Music Every Saturday The Ethnic Legacy 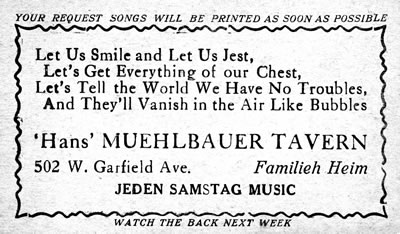 The musical traditions fostered by German speaking immigrants are forever woven into the cultural fabric of Wisconsin. As much a part of Wisconsin as the stereotypical cheese, beer, and brats are today’s overtly ethnic musical activities of polka bands and Swiss-American yodelers. This section of the exhibit looks at examples of German and Swiss traditional music as it has been practiced in Wisconsin since the 1920s.

The delightful mixture of German and English (with its misspelled “Music” for the German Musik) found on the small 1930s advertising card for Hans Muehlbauer’s Milwaukee tavern could almost act as a metaphor for the evolution of German traditional music brought to the United States; sometimes it’s German, sometimes it’s American, sometimes it’s a blend of both. 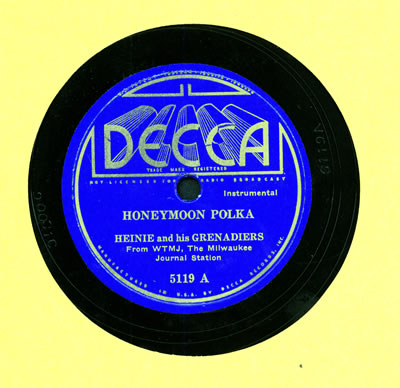 This blending of German and English is no more evident than in the activities of Jack Bundy, a Milwaukee radio announcer in the 1930s and ‘40s. For comedic effect, Bundy adopted a German persona as leader of “Heinie und his Grenadiers,” a band which featured performances of German folk music on its regular radio broadcasts.

The band was immensely popular and made recordings for Decca and Coral Records. Heinie responded to listener mail with post cards which included his photograph and a brief message employing his characteristic parody of the German-American accent and phrase structure: “Ve hopes you keep listenin’ in, unt dot you writes again, so often vot you like.”

The Alte Kamaraden Band from Freistadt, Wisconsin was organized in 1942, but the roots of the group reach well back into the nineteenth century when the city was settled by Lutheran dissenters from Pomerania and Brandenburg. By the mid-1970s, the band consisted of fourth and fifth generation German-Americans performing a repertoire featuring “the old traditional music that the forefathers…brought with them from Germany.” Still active, the band has toured across the United States and performed in Germany on numerous occasions. 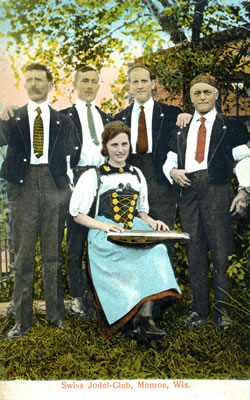 Wisconsin’s Green County was the destination of thousands of nineteenth century German-speaking Swiss immigrants. The cities of Monroe and New Glarus celebrate this rich Swiss heritage in their architecture, restaurants, and of course, in their music-making.

A unique part of their 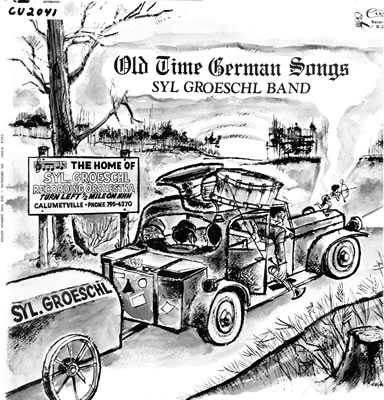 musical activity has included the formation of yodel clubs, an idea which originated in Switzerland but quickly leaped the Atlantic. In 1921 a club was formed in Monroe and by 1928 another had emerged in nearby New Glarus.

The German or “Dutchman” style is one of several distinctive varieties of polka music common in Wisconsin. Among the many prominent polka musicians who performed in this style were the Syl Groeschl Band from Calumetville.