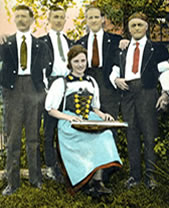 This exhibit explores the contributions made by people of German and German language heritage to the musical life of Wisconsin. The primary emphasis is placed on the activities of the German immigrants who arrived during the nineteenth century with a secondary look at the succeeding generations of German-Americans in the twentieth-century.

As one might expect, the western classical music tradition is very evident, represented here by composers Hugo Kaun, Otto Luening, and Ernst Krenek. Depicted as well are the singing societies that emerged both locally and nationally giving witness to the strong classical choral tradition in which many German-Americans participated.

Folk and popular traditions brought to this country formed a prominent and ongoing outlet for musical activity. The popular tradition is illustrated through the ubiquitous nineteenth century town band and some noteworthy bandleader/composers. The exhibit also looks at German and Swiss folk musicians who have variously preserved, expanded upon, and carried forward to the present day traditional music from the old world. Early sound recordings are exhibited which help to interpret and understand the immigrant experience.