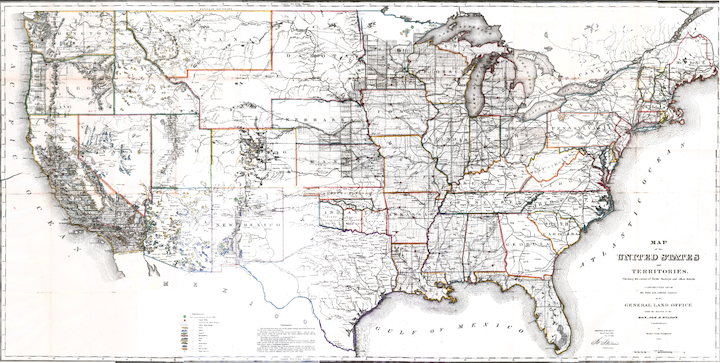 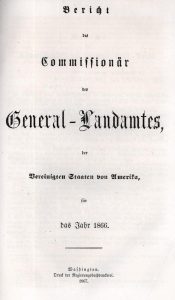 From the earliest days of the Republic, the U.S. government has translated many of its publications from English into other languages. A German-language example in the MKI Library is the Bericht des Commissionär des General-Landamtes, der Vereinigten Staaten von Amerika, für das Jahr 1866. Washington: Government Printing Office, 1867. This book is a translation of the U.S. Department of Interior’s Report of the Commissioner of the General Land Office, 1866.

It comes with a 27”x 54” “Map of the United States and Territories, sh[o]wing the extent of the Public Surveys and other details constructed from plats and official sources of the General Land Office.” The map depicts in visual detail what the report describes in the narrative, tables, and statistics. Territorial boundaries, locations of land offices, existing and proposed railroad lines, and various mineral deposits are colored in by hand. What makes the MKI copy of this map unique is its nearly pristine condition. Except for some folding creases, the paper is still white, and the coloration looks as bright as it was over 150 years ago.

Published five years after the Homestead Act of 1862, the report not only provided a governmental record, but was also intended to encourage settlement of the American interior and West. Immigrants, including German-speakers, thus were a prime target audience.

The reader learns that “it has been the cherished policy of the government to assure upon the most liberal conditions of the actual settler a title of his home and improvements.” “We have large quantities of surveyed lands which are undisposed of, it being the practice […] only to advance the lines where settlements are extending on arable lands. These fields, in genial climates and inviting localities, are now freely open to homestead settlements. We have surveyed acres enough to meet the demands of the multitudes that may settle upon them.” [18]

“During the past year [1866]surveying operations have been prosecuted with energy in in Minnesota, Dakota, Kansas, Nebraska, Colorado, California, Oregon, Nevada, and Washington.” In Wisconsin, the last public lands were sold that year, almost all near St. Croix, Eau Claire, and La Crosse, except for “seventy-seven lots, situated within the Fort Howard reserve.”

Special attention is given to different landforms such as “arable land,” “timber,” “swamps and inundated,” and “canals.” The Commissioner voices his concern that “the felling of the forest […] to make way for the plough […] has reached a period when the demand for timber is rapidly on the increase, and the supply diminishing,” even in states where timber was abundant, such as Michigan and Wisconsin. The Commissioner’s suggested remedy is “to amend the homestead law as to require settlers in localities where there is a scarcity of timber to plan on each homestead track a few hundred trees, as part of a system of cultivation necessary to complete the settler’s title.”

Especially in the West, mineral interests loomed large, and the report includes sections on the surveying and homesteading of government lands that hold coal, petroleum, iron, silver, copper, gold, and other mineral deposits. 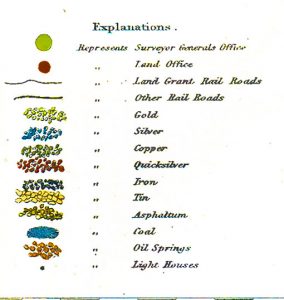 Browse the entire map in detail in the David Rumsey Map Collection,
and read the Commissioner of the General Land Office Report for 1866 in the original English online.