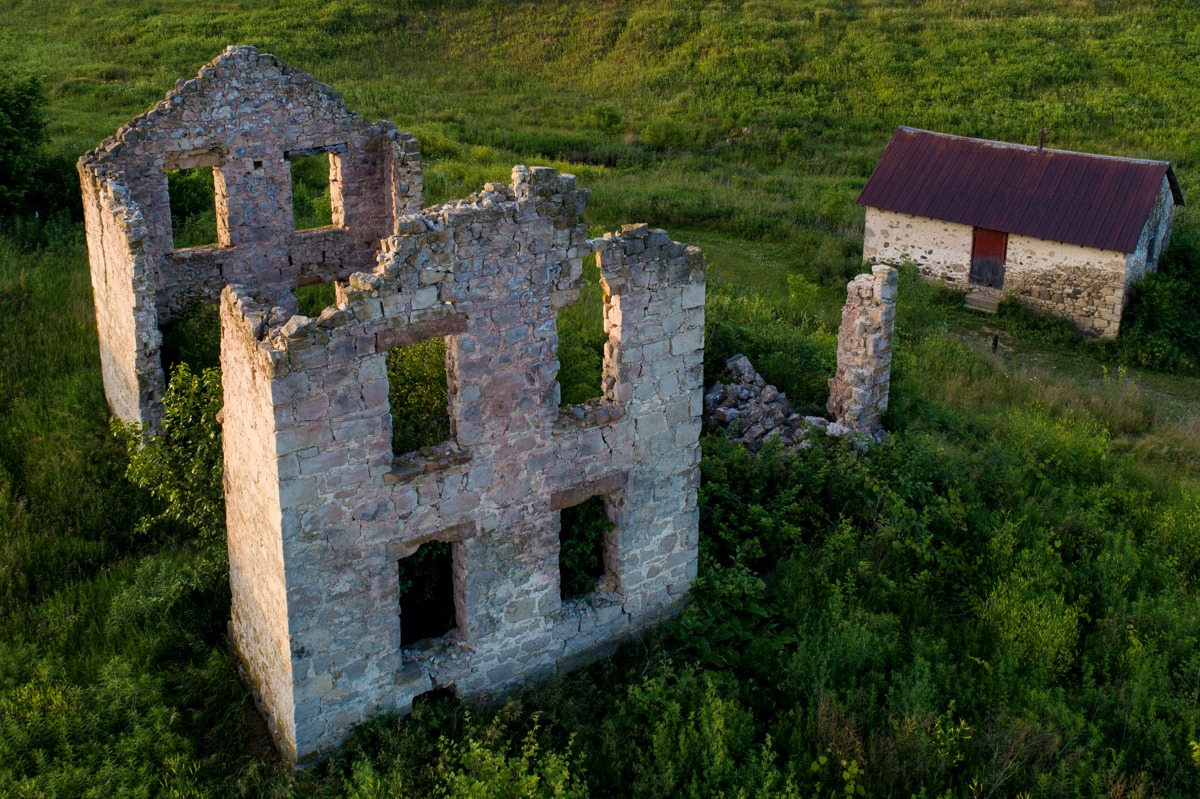 Most museums, historic homes, libraries, galleries, and other buildings are closed this summer, but there are many places outdoors that we can still visit and explore. Take a road trip, go on a bike ride, or join a walking tour, and make a German-American site your destination!  The following are just three suggestions in and around Madison. There are many more fascinating locations with a German-American history to be discovered in Wisconsin and all over the country.

In the Town of Berry, right across the street from beautiful Indian Lake County Park, the ruins of two old stone buildings stand out in the landscape. They are the remnants of the Matz family farmstead. A historical marker shows a picture of the original house, which was built of local sandstone around 1875 and burned down in 1949.

The land was first homesteaded in 1852 by Friedrich Matz who had come to Milwaukee in 1848 from the village of Landsendorf in Thuringia, Germany. In America, Friedrich worked on the railroad for four years to save money for the purchase of his initial plot of land. In 1854, he married Katharina Schubert who had immigrated to Wisconsin from the Oberfranken region in Germany. Like almost all early settlers in the region, the Matzs’ first dwelling was a simple cabin that has not survived.  Friedrich is quoted as saying “An American farmer isn’t set up right away like a German, he simply builds himself a house, so that he can live, and the barn is finished right away, the sky is the roof and the ground is the floor, that’s the kind I have.”

Pope Farm Conservancy, just west of Madison, lies at the center of an area that was settled in the 1850s and 1860s by immigrants from the Grand Duchy of Mecklenburg-Schwerin in Germany.  On 105 acres, the Conservancy offers a web of educational trails through prairies, oak savannas, and farm fields that tell you about the land, its geology, flora and fauna, as well as its human history, from early Native Americans to the first settlers from Mecklenburg.

There are no old buildings or ruins here, but one can see the footprint of an early settler cabin, where Joachim (James) and Sophie Goth lived with their family for about a decade after their arrival in 1867. Three signs interpret the location and transport you back in time. You can see them here: German Immigration to Wisconsin  — German Immigrants’ Log Cabin Site — Immigrant Life at this Location.  Or take a virtual tour and watch eight short videos on German Immigration that were created by the Conservancy. The last segment tells the story of the Goth family. 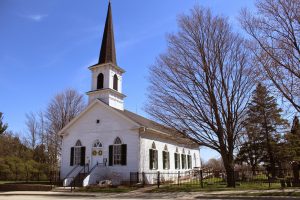 A mile east of the Conservancy on Old Sauk Road you find “The White Church on the Hillside,” which was the First German Evangelical Lutheran Church of the Town of Middleton. Joachim Goth’s brother Carl and uncle Jürgen and their families were among the earliest members of the congregation, which was established in 1852. The current church dates back to 1866 and was expanded in 1884. Stroll around the adjacent cemetery and see the names of the first Mecklenburg settler families, names that are still prominent in the community today.

You can find out more about immigration from Mecklenburg to Middleton in  the (attached) articles by Antje Petty in the Max Kade Institute Spring 2012 Newsletter: “Traces in the Landscape: Immigration from Mecklenburg to Middleton, Wisconsin,” and “The History of the First German Evangelical-Lutheran Congregation in the Town of Middleton, Dane County, Wisconsin.”

Click here to plan your visit of Pope Farm Conservancy, and here to find out more about the Historic German Lutheran Church.

In the nineteenth century, German immigrants had a significant presence in the city of Madison, too. Streets, parks, buildings, and cemeteries still tell their stories. Explore German-American history in Madison by taking a Historic Architecture Walking Tour of the Third Lake Ridge with the The Madison Trust for Historic Preservation.

Just one of the many sites is the Biederstadt-Breitenbach Grocery at the corner of Williamson and Patterson Streets. The brick building was constructed in 1874 after a fire destroyed the original store run by Charles Biederstadt and his sons. The Biederstadt family, originally from Bavaria, had come to Madison in 1850 via New York and Milwaukee. After Charles’  death in 1890, the store was leased to George C. Breitenbach and his son George F. The Breitenbach family eventually bought the building and continued to operate the store until 1951.The owners’ private quarters were upstairs and the business on the first floor.  In addition to groceries, the store sold dry goods, feed, china, glassware, and more. It also had a popular candy counter, and—not unusual for its time—the storefront functioned as a saloon.

In the 1977 nomination papers for the City of Madison Landmarks Commission to request historic status for the building one reads the following:

The primary significance of the Biederstadt/Breitenbach Grocery is its historic function in the nineteenth-century German speaking community that lived in the west end of Third Lake-Ridge. It serves as a reminder of the social and economic order of the period and of the distinctive ethnic characteristics of that order. […] It is also important at a community level because of its association with the Breitenbachs, a large merchant family with significant ties to the history of the Third Lake Ridge area and other German families in the city.  Charles Biederstadt began the grocery business on Williamson Street in a period after the German-speaking population had gained a firm foothold in the area.

Typical of such establishments on the street, it served a multiplicity of functions: it purveyed a variety of goods and services, dry goods, food and liquor, and was also a community gathering place and a home. One suspects that the combination of saloon and grocery may have been an ethnically derived phenomenon, rather than a nineteenth-century combination per se.

For an overview of Madison’s rich German history, read this post “Germans in Madison” by Michael Bridgeman.

Click here to reserve a tour of the historic Third Lake Ridge area.

Let us know about a German-American site in your area!