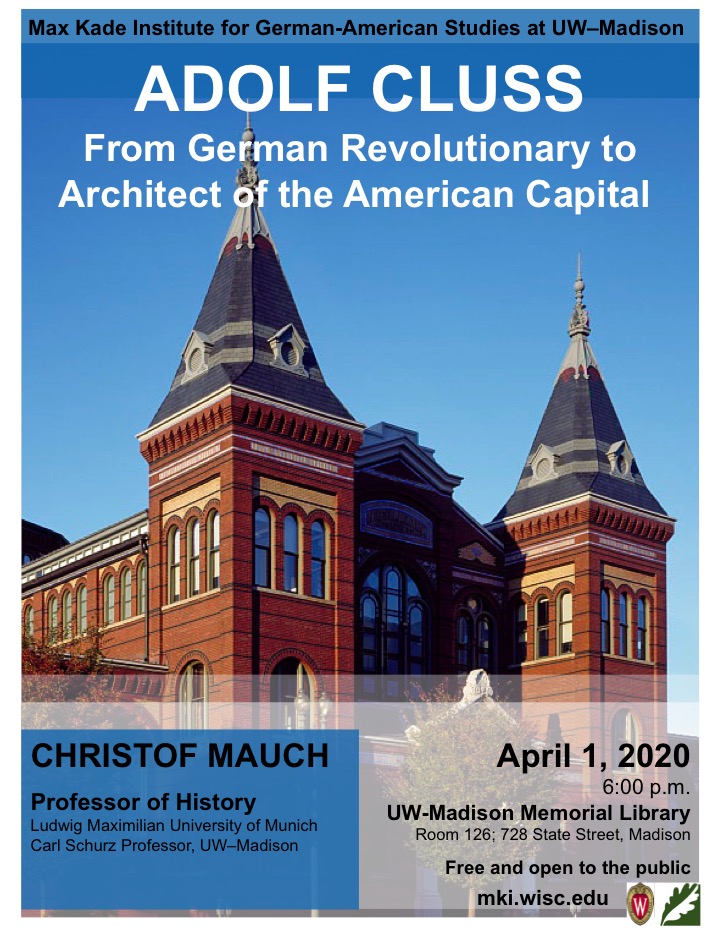 THIS EVENT HAS BEEN CANCELLED!

Join us on April 1, at 6:00 p.m. for a lecture by Christof Mauch, Professor of History at Ludwig Maximilian University in Munich. For detailed event information CLICK HERE

Adolf Cluss (1825-1905) was a native of Heilbronn, Germany, who immigrated to America after the failed German revolution of 1848. A member of the German Communist Party, he was a friend of Karl Marx and continued to correspond with him from America. After a few unsuccessful attempts to instigate working class uprisings in Baltimore, Maryland, Cluss established himself both in the German-American community and in the professional and intellectual milieu of Washington, D.C. He soon was considered one of the most important architects of the nation’s capital. With tremendous creativity, technical skills, and a unique vision for a new cityscape, Adolf Cluss designed some of Washington’s most prominent public buildings and put the capital on the map of international architecture and planning.

Using historic images, this lecture provides an introduction to Cluss’ architecture, while placing his life and career in the context of German-American culture, history, and politics.

Christof Mauch is Chair and Professor of American Cultural History and Modern History, Director of the Lasky Center for Transatlantic Studies, and Director of the Rachel Carson Center for Environment and Society, at Ludwig Maximilian University in Munich, Germany. He is currently the Carl Schurz Memorial Professor at UW–Madison. During his tenure as Director of the German Historical Institute in Washington, D.C. (1999-2007), Dr. Mauch was involved in a large research and exhibition project about Adolf Cluss.