Paul Haedicke (1852-1903) was a German soldier and journalist who spent much of his career in the US, usually as a foreign correspondent for German papers. His science fiction novel, The Equalities of Para-Para, Written from the Dictations of George Rambler, M.D., F.R.G.S. (1895), is a satire on the uniformitarian implications of a socialist utopia whose egalitarianism is enforced by surgery designed to standardize the populace, though there are also moments when Para-Para seems almost attractive.
https://sf-encyclopedia.com/entry/haedicke_paul 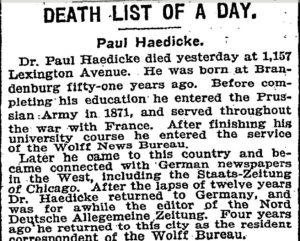 “Weird Story of German Diplomacy. Emil Witte’s Narrative of Diplomatic Methods Practiced at Washington Is Interesting Anyway.”
New York Times, Dec. 14, 1907
“Witte’s book will hardly cause an international disturbance, but apart from the question of its credibility, it makes interesting reading.”

“I went to New York and found that the secret-service man from the Foreign Office was no other than the editor of the semi-official Continental Telegraph Company (Wolff’s Bureau), Mr. Paul Haedicke, who between ourselves admitted that he had been sent to America to ‘exercise a control over the Associated Press,’ in whose office in the New York Central he opened his bureau; and further, that at my suggestion ‘he was going to develop an edition of German-American news correspondence.’ He congratulated me in a cynical manner of my clever idea . . .” (p. 38)

“A commission from the Imperial Chancellor lies neglected while Paul Haedicke carouses about town.” (p. 49)

“On investigation by the Ambassador it was discovered that Herr Haedicke had not once during whole time been seen in his office, as he was too busy with a beer trip, rather more extended than usual, through Greater New York, to trouble himself with such small matters as the orders of his chief in Washington. One sees how the fate of nations often hangs on blind coincidences.” (p. 55)

“The fictitious H. telegram in the German papers originated with Paul Haedicke, the New York special correspondent of Wolff’s Bureau, and von Holleben’s confidential man. An unheard-of crime had been committed, so low, so cowardly, so brutal, so refined, so devilish, that happily there have been few like it in history.” (p. 181)

“How like the wrath of Heaven comes the fate which has smitten most of the actors of the German-American drama which I have unfolded: Herr von Holleben forced, under disgraceful circumstances, to leave the United States; Carl Bünz, the German Consul General in New York, twice under the operating knife and close to death; a German journalist who slandered me murdered in Morocco; the traitorous American secret-service agent Peeke sentenced to five years in the penitentiary; Paul Haedicke dead before his time . . . ” (p. 263)