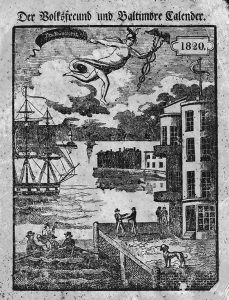 When one thinks of an almanac today, the first thing that may come to mind is the American Farmers’ Almanac, especially when wondering how much snow to expect as winter approaches. Almanacs are annual publications that, traditionally, offer long-range weather predictions, information on celestial activities such as the phases of the moon, articles on natural remedies, and advice on agricultural practices, as well as entertaining and educational stories, articles on history and traditions, folk wisdom, poetry, and songs. 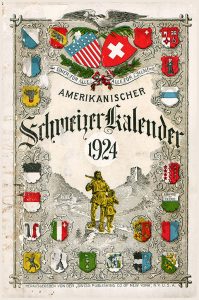 Almanacs have been around, in one form or another, for centuries, and were absolutely a part of life in Colonial America. The first German-language almanac in North America was made available in 1731; titled Der Teutsche Pilgrim, mitbringende einen Sitten-Calender (“the German pilgrim, bringing a moral calendar”), it was published by Andrew Bradford and was printed in a Roman typeface commonly used for English text. In 1739, Christoph Saur published the first issue of Der Hoch-Deutsch Amerikanische Calender, printing it in the Fraktur typeface that was much more familiar to German readers of the time. 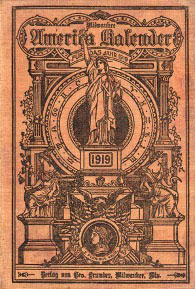 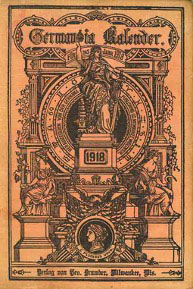 Over the decades, the MKI Library has received donations of over 200 issues of various Kalender, dating primarily from the early 19th to the mid 20th centuries. One well-represented title is the Germania Kalender, published by the firm of George Brumder in Milwaukee, Wisconsin, from 1881 until 1918, when, after America had entered the First World War; the title was changed to Milwaukee America Calendar for the 1919 issue. At the same time the cover image of the female personification of Germania was replaced with Lady Liberty. The MKI Library is only missing issues for the years 1882, 1883, and 1885; the last issue in our collection is for 1925.

German-American Kalender were put out by newspaper companies (often as a premium for subscriptions), religious denominations, medical pharmaceutical businesses, and other firms across the United States. They reflected the needs and interests of their German-speaking readers in any given year, serving to maintain their ethnic identity while also assisting with assimilation into the American mainstream. Specific examples of topics include a celebration of the Swiss in Monroe, Wisconsin (Amerikanischer Schweizer-Kalender, 1924), whether the moon has any influence on the growing of plants (Germania Kalender, 1918), and a lament that “the day when the last Native American will cease to exist in America is not far off” (America-Herold Kalender, 1936). 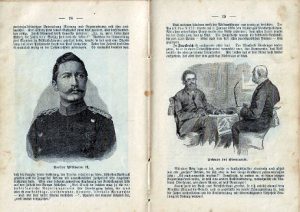 One interesting item, among so many, is the following piece from the 1889 Abendschule-Kalender, relating a meeting between eminent German American Carl Schurz and Otto von Bismarck. The two were said to have spent hours discussing politics and sharing a walk down the promenade, an impassioned Bismarck defending the “strong, purposeful, honest, liberal monarchy” as a model government, while decrying the lack of a strong head of government in France.