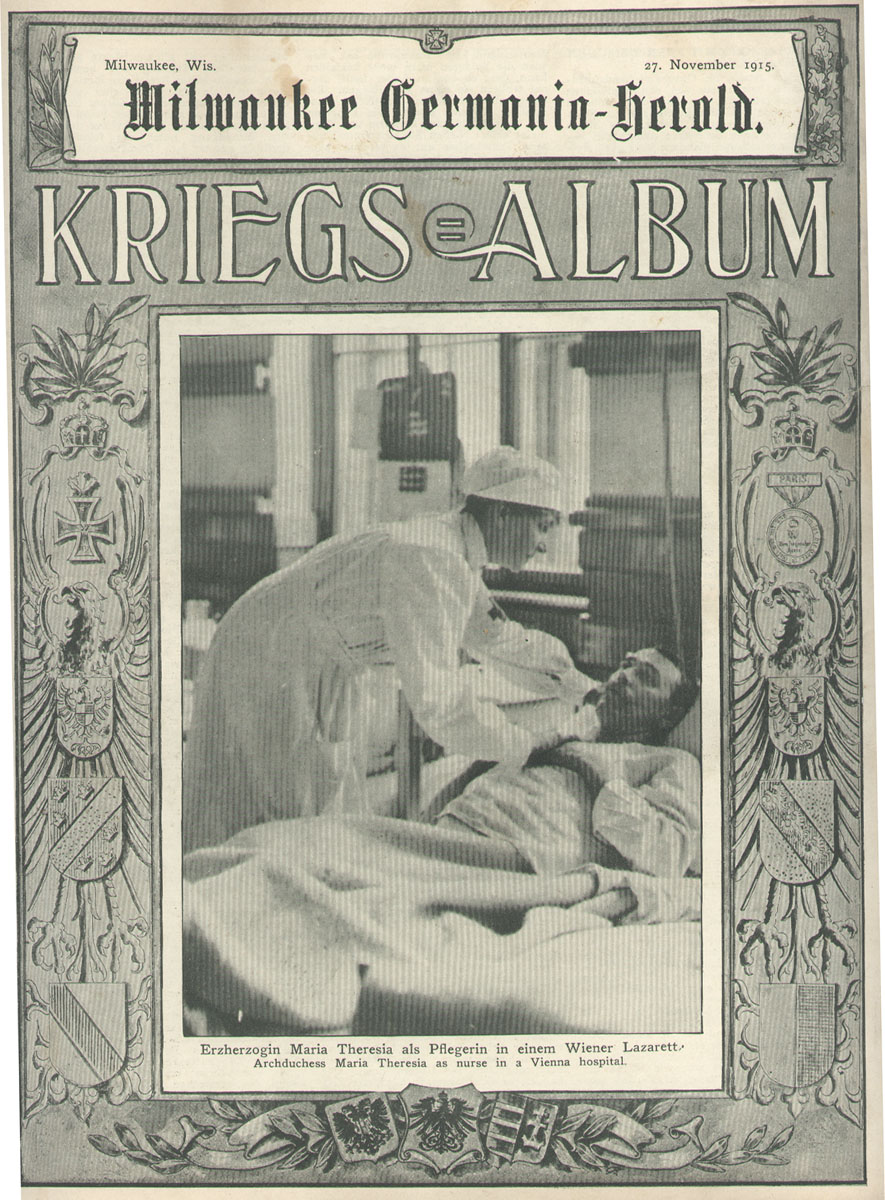 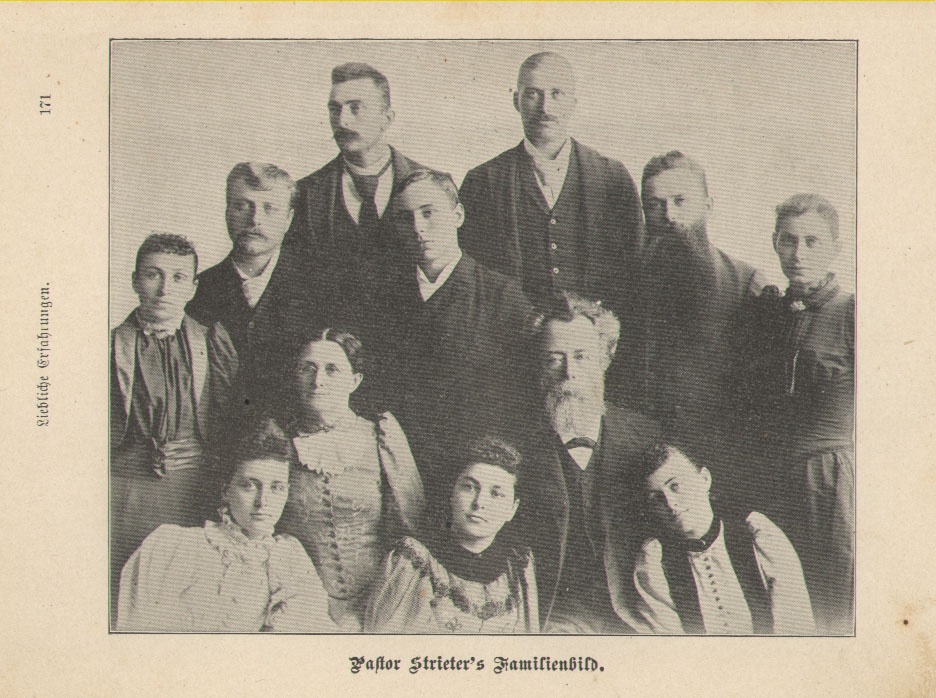 “The Adventures of Alfred Bader: A Life of Innovation, Achievement, Cultivation and Generosity.” Perspektiven (Goethe House of Wisconsin), vol. 5, no. 2, Spring 2006, pp. 1, 7-9, ill.
Biography of Austrian-born Alfred Bader, has made a home in the Milwaukee area for more than half a century. He is an art collector and dealer, as well as a benefactor in the fields of chemistry, education, and Jewish interests.

Baensch, Emil. What Manitowocers Read 80 Years Ago. [Manitowoc, Wis.: s.n., 1933]. [8] pp.
During 1854 through 1856, Postmaster S. [Sylvester] A. Wood kept a record of subscriptions to newspapers and magazines held by Manitowoc residents. “From Mr. Wood’s record I have copied names of subscribers and the titles of publications. . . . In 1855 the population of our village was 2185. The number of subscribers recorded is 453. The number of subscriptions is 1854, an average of over 4. The number of publications listed is 200 of which 33 were German, 34 Norwegian and the balance English. 32 were of a religious nature, 22 literary magazines and 23 commercial and professional journals. . . . During the period covered by this list there were five local newspapers
Donated by Karyl Rommelfanger. 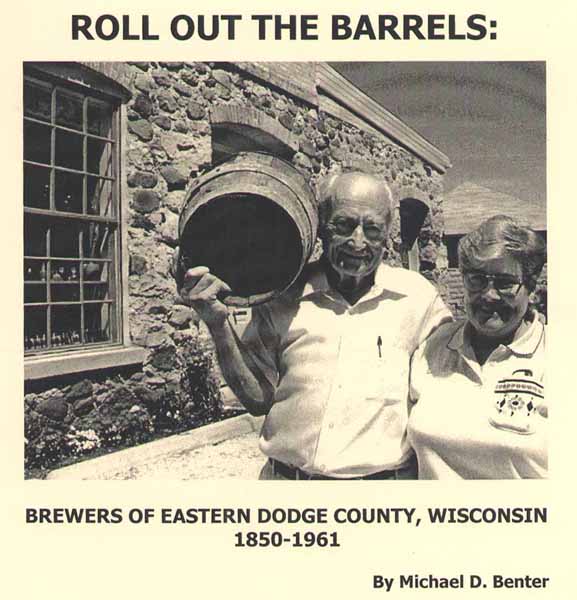 Benter, Michael D. Roll Out the Barrels: Brewers of Eastern Dodge County, Wisconsin, 1850-1961. [Milwaukee, Wis. ?]: Michael D. Benter, 2004. vi, [184] pp., ill.
From the Foreword: “This book is more a personal and social account of the brewers themselves than a physical and technical description of their respective breweries. . . . the following is preponderantly genealogical, historical, and sociological, detailing where these people came from–with whom, why, and when–and the socio-cultural, material, and often political roles they assumed as the brewers of beer in the tiny villages or small towns of an evolving Dodge County.” Includes breweries that operated in Farmersville, LeRoy, Mayville, Huilsburg, and Theresa. In Farmersville the brewery was run by Georg Schmid and his family, and it was often locally referred to as Greinerschmid’s Brewery. In LeRoy names associated with the brewery were Kohl, Weidig, Platzer, and Seifert. Mayville boasted several breweries, owned or operated by Germans with names such as Bachhuber, Boehmer, Darge, Funke, Kohl, Kroesing, Mayer, Steger, and Ziegler. Huilsburg had the Herman Brewery, founded by John and Jacob Huels; other names associated with that brewery are Thielke, Scharmann, and Eifert. In Theresa there was the G. Weber Brewing Company. Other names associated with brewing in Theresa are Nenno, Bandlow, Quast, Asenbauer, Luhn, Hanna, Chemer, Reimer, Radtke, and Lemke.
Donated by Michael D. Benter.

Diefendorf, Jeffry M. “From Germany to America: Walter Gropius and Martin Wagner on Skyscrapers and the Planning of Healthy Cities.” Bulletin of the German Historical Institute, Supplement, no. 2, 2005, pp. 29-50, ill.
Papers originally presented at the 2003 conference: “From Manhattan to Mainhattan: Architecture and Style as Transatlantic Dialogue, 1920-1970”; includes bibliographical references.
“In order to explore the complex conjuncture of the themes of transatlantic exchanges between Germany and America, urban planning, and the design of skyscrapers, I have chosen to look at two emigre architects and planners, Walter Gropius and Martin Wagner, both part of the generation that created the modernist movement.”

Dost, Elizabeth Arnswald, ed. Home Alone in America: Letters Exchanged by a Young German in the U.S. and His Family in Berlin from 1946 to 1955. Westminster, MD: Heritage Books, 2004. xiv, 230 pp., ill.
“It was September 1946, just a year after the war’s end, when an American-born German youth stepped off the ship alone in New York City. In a hasty decision, precipitated by the chaotic aftermath of World War II, Helmut’s well-meaning parents had sent their gifted teenager alone to the United States to claim the supposed advantages of his American citizenship–and hopefully pave the way for their own early immigration. Little did they dream that nine years of separation lay ahead! The extraordinary collection of letters exchanged during those years by Helmut Dost in the United States and his family in Berlin tell the suspense-filled story of a young man’s unanticipated struggles and challenges in the country of his birth. At the same time, they give us intriguing glimpses of life in beleaguered West Berlin during the tense days of the Cold War.”
Donated by Elizabeth Arnswald Dost.

Heckert, Charles W. “Diary of Captain Wiederholdt (Part II): Defeat and Captivity at Trenton = Tagebuch des Captain Andreas Wiedersholdt vom 1776-1780. Translated Excerpts from a German Hessian Officer’s Diary in the American Revolutionary War.” The Palatine Immigrant, vol. 3, no. 2, March 2006, pp. 26-31, ill.
Part I of this Tagebuch (Diary) can be found in the Dec. 2005 issue of The Palatine Immigrant.

Honeck, Mischa. “In Pursuit of ‘Freedom’: African-, Anglo-, and German-American Alliances in the Abolition Movement.” Bulletin of the German Historical Institute, no. 38, Spring 2006, pp. 99-117.
Includes bibliographical references.
From the concluding paragraph: “The abolitionist intellectuals I deal with in this project established networks, small-scale deliberative democracies, in which they opened up channels of critical exchange and deliberated about their common affairs. Opposition to slavery was one, if not the constituting element of these networks. But it was equally a point of departure for men and women who discovered that, with regard to their egalitarian visions, they were only part of a great concert. In this sense, conversations about slavery and abolition between the three subgroups I have outlined were at the same time conversations about the chances and limits of democracy in an international, multicultural setting. So as these three groups, African-American intellectuals, Anglo-American abolitionists, and German-American Forty-Eighter revolutionaries, were pursuing “freedom,” each according to their own political and cultural understanding, they learned how and to what extent their definitions of freedom and democracy diverged from each other. They added another dimension that is still fairly unknown to Abraham Lincoln’s famous observation that liberty had become a universal slogan; ‘But in using the same word,’ he went on, ‘we do not all mean the same thing.'”

Mannone, John Charles. “A Propensity for Genius: That Something Special about Fritz Zwicky (1898-1974).” Swiss American Historical Society Review, vol. 42, no. 1, Feb. 2006, pp. 3-42, ill.
“It is difficult to write just a few words about a man who was so great. It is even more difficult to try to capture the nuances of his character, including his propensity for genius as well as his eccentric behavior edging the abrasive as much as the funny, scope of his contributions, the size of his heart, and the impact on society that the distinguished physicist, Fritz Zwicky has made. So I am not going to try to serve that injustice, rather I will construct a collage, which are cameos of his life and accomplishments. In this way, you, the reader, will hopefully be left with a sense of his greatness and a desire to learn more about him.”

[Materials on Carl Roeser (1809-1897), of Manitowoc, Wisconsin]. 2 pp.
Includes a copy of a page from the Aug. 30, 1853 Manitowoc Herald (in English) about a new German-language Democratic paper in Manitowoc to be edited by Carl Roeser / Röser; and a copy of a page from the Nov. 18, 1897 Manitowoc Post (in German) concerning Roeser’s death in Washington. Roeser fled Germany after the 1848/49 Revolution and lived in Wisconsin until 1861, when he left to serve in the Lincoln administration.
Donated by Karyl Rommelfanger.

“Naturalizations from Washington County.” Hessischer Verein ( Germantown, WI ), vol. 1, no. 1, July 2005, pp. 3.
Alphabetical listing of names from Adam to Fisher who were born in Kassel, Darmstadt, Nassau, Hesse, and Waldeck, and who naturalized in the 1830s to 1860s in Washington County, Wisconsin.

“Naturalizations from Washington County.” Hessischer Verein ( Germantown, WI ), vol. 1, no. 2, Dec. 2005, pp. 3.
Alphabetical listing of names from Fitting to Jugend who were born in Kassel, Darmstadt, Nassau, Hesse, and Waldeck, and who naturalized in the 1830s to 1880s in Washington County, Wisconsin.

“Naturalizations from Washington County.” Hessischer Verein ( Germantown, WI ), vol. 1, no. 3, Mar. 2006, pp. 3.
Alphabetical listing of names from Jungblut to Nehrbasz born in Kassel, Darmstadt, Nassau, Hesse, Waldeck, and Frankfurt am Main, who naturalized in the 1850s and 1860s in Washington County, Wisconsin.

Redmond, Shirley Raye. “Carving an Independent Life.” The Journal (German-Texan Heritage Society), vol. 28, no. 1, Spring 2006, pp. 48, ill.
Article first appeared in Texas Co-Op Power, August 2005, p. 20.
“The terms ‘daring’ and ‘visionary’ have been used to describe the statues of Texas heroes Sam Houston and Stephen F. Austin at the state capitol in Austin. The words could also be used to define Elisabet Ney, the saucy German-American sculptor who created them.” Born in 1833 in Münster, Westphalia, Ney settled in Texas in 1872.

Rokus, Josef W. “From Körbecke to Manhattan: The Search for the First Rokus in America.” Germanic Genealogy Journal, vol. 9, no. 1, Spring 2006, pp. 5-13, ill.
Recounts how the author “researched a distant relative who came to New York in 1860 and the engaging life-story of this Civil War soldier. Beginning researchers should be sure to read this article and the extensive endnotes, which include numerous research strategies and tips.”

Sternberg, Paul, and Lois Edwards. “Immigrant Ships.” Germanic Genealogy Journal, vol. 9, no. 1, Spring 2006, pp. 17-20, ill.
Discusses how to find the name of the ship that brought your ancestors to America as well as detailed information on the ship itself.

Stone, Linda, Jean Nepsund, and Eldon Knuth. “Independent Order of Red Men / Unabhangiger Orden der Rothmänner: The Donation of Record Books to IGS of Mohican Lager No. 52, U.O.R.M.” German-American Genealogy (Immigrant Genealogical Society, Burbank, CA ), Spring 2006, pp. 1-4, ill.
“Several years ago Mr. Ralph M. Wyser came into possession of three old ledger books of the Independent Order of Red Men. . . The minutes ledger is in old German handwriting. . . of a group here in Los Angeles [and] seems to have begun on 21 February 1905.” Includes a photocopy of the page of the “Erster Protokoll” with a translation. The other books are a ledger of financial records and a correspondence file. “Some letters were correspondence with a state headquarters in San Francisco, CA.” The ledgers may be donated to the Improved Order of Red Men at their National Headquarters at the Red Men Museum and Library at Waco, Texas.

Viehmeyer, Allen. Personal Collection of German-American Imprints. [2002]. 53 pp.
Listing of some 500 German-language imprints published in the United States between 1739 and 1920 in the personal collection of Allen Viehmeyer.
Donated by Allen Viehmeyer.

Wangemann, A. “[Translation of a Letter from a German-Texan Confederate Soldier].” The Journal (German-Texan Heritage Society), vol. 28, no. 1, Spring 2006, pp. 58-61, ill.
Translated by Dr. James M. Hyde of Many, Louisiana.
Translation of a letter written during the Civil War by A. Wangemann, a German-Texan soldier in the Confederate Army, and dated June 4, 1864. “It appears Wangemann was from Austin County. He mentions other soldiers named Traugott Hildbrand and John Meiers, who probably were also from Austin County.” Includes an image of the last page of the letter in the original German.

Wolff, Linda. “Along the Indianola Trails to New Braunfels and San Antonio.” The Journal (German-Texan Heritage Society), vol. 28, no. 2, Summer 2006, pp. 129-36, ill.
“The Indianola Trail is most associated with the route taken by German immigrants brought by Prince Carl Solms-Braunfels from Germany to settle on land grants in the Texas Hill Country. One might wonder how many of the German immigrants brought to Texas by the Adelsverein knew–and understood–that their land grants were going to be more than 150 miles inland from their landing place on the Texas Gulf coast.”