Birmelin, John. Mammi Gans: The Dialect Nursery Rhymes of John Birmelin. P. A. Preston Albert Barba, comp. Allentown, Pa.: Schlechter’s, n.d. [28] pp.
Title taken from cover. Also on cover: Selected by Dr. P. A. Barba from a group of 278 children’s poems. Schlechter’s, Publishers for the Pennsylvania Germans Since 1810.
” John Birmelin, the beloved poet of the Pennsylvania Germans, did not write many of his poems until the latter part of his life, which was devoted, for half a century, to music. The creative genius of his poetry developed from a life long hobby of putting into verse the many phases of his every day life. As a boy he rhymed vehement indignation against the owner of a dam in Longswamp who prohibited fishing. Later he kept writing for his own amusement, until one day he showed Dr. Harry Hess Reichard some of his poems. Dr. Reichard taught him the mechanical details of poetry and this combined with his musical training made writing poetry with the skill of genius just come natural. His Mother Goose Rhymes in the dialect are so entertaining that we were proud to obtain his manuscripts and publish them in this booklet. — E. W. S.”
Donated by Dale McIntyre. 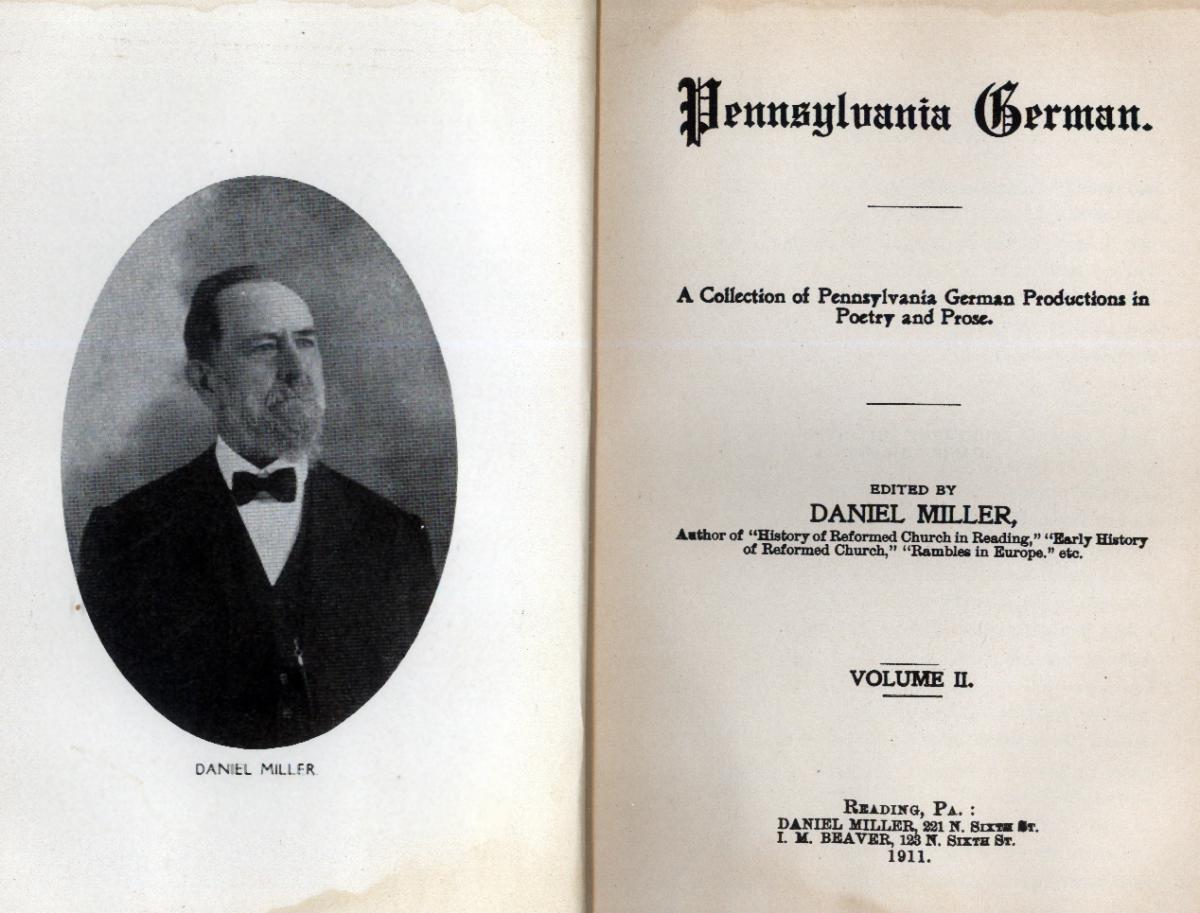 From the Preface: When I published the volume entitled “Pennsylvania German” in 1903, a leading purpose was to present the Pennsylvania German dialect in what I conceived to be its proper form. Hitherto most productions in the dialect were presented in what I regarded as an unnatural form. Usually English spelling was employed, which made the dialect difficult to read, even for Germans. This I regard as one cause why the dialect has been so largely held in derision. This form was no doubt adopted by some who undertook to represent the Pennsylvania Germans, because they really knew little or nothing about the German language. The dialect in question in German, not English, and all attempts to present it in an English form will do violence and injustice to it, and fail to secure honor for it. The first volume met with favor to an unexpected degree. . . . Since that time the subject has become more interesting to me than ever, and I have been encouraged to publish a second volume, which is now sent forth. I had collected much additional material which was considered worthy of being preserved in permanent form. This second volume contains some features not included in the first. One of these is a vocabulary of over 1,200 words, which are given in three languages — English, Pennsylvania German, and German. This is intended as a help to those who are not familiar with the dialect. Another new feature is a collection of Pennsylvania German proverbs, and still another is a presentation of variations in the dialect in different sections. . . . The authors of the poems are given as far as known. The articles in the prose part, with few exceptions, are from the pen of the undersigned. I had intended to follow a uniform rule of spelling, but found this impossible in the first part of the book. The views of some of the authors of the poems differ upon this subject, and I have concluded to allow some liberty in this line.
Donated by Dale McIntyre, 2013.

Troyer, Sylvia. Schlaf Boppli Schlaf: Rhymes. Locke, NY; Sugarcreek, OH: Sylvia Troyer; Carlisle Printing, 2006. [20] pp., ill. (all col.).
Donated by Dale McIntyre.
Children’s verses and rhymes in Pennsylvania German dialect. — From back cover: “All the verses are old ones, handed down from many generations. Surely some of them came over the Atlantic with our ancestors. I’m sure not every family sings them all alike word for word.”

“Emigration Recruitment Letter.” Die Pommerschen Leute, vol. 35, no. 1, Winter 2012, pp. 6-7.
Translation of a letter dated October 8, 1869, from C. Behmer, “Shiffs-Capitain [and] Konzessionirte General-Agentur zur Beförderung von Auswanderern und Reisenden nach Amerika und Australien für den Umfang der Preussischen Staates” in Berlin, “To the farmer Mr. Daniel Splittstoesser” in Neu Grunau, West Prussia. As Splittstoesser intends to travel to St. Paul, Minnesota, Behmer advises that “Baltimore is better suited as [a] disembarking place than New York, because then you can travel by train for 2 and a half Reichstalers each person.” Behmer describes the costs of travel from Bremen to Baltimore, provides advice on preparing rifles and scythes to avoid customs, and encloses “a filled-out postal money order form, on which you may pay the sum . . . and you will promptly receive from me the shipping contract.” 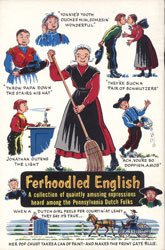 “NASA Loses a Legend: German-American Space Pioneer Jesco von Puttkamer.” German-American Journal, vol. 61, no. 1, Feb./Mar. 2013, pp. 29, col. ill.
Jesco Freiherr von Puttkamer was born in Leipzig on September 22, 1933. In 1962, at the invitation of Werner von Braun, von Puttkamer came to NASA, working first as an engineer during the Apollo Program at the Marshall Space Flight Center in Huntsville, Alabama. In 1974 he transferred to NASA headquarters in Washington, DC, and was a technical manager for the International Space Station. He was also the author of several science fiction stories, and served as technical advisor for “Star Trek: The Motion Picture.” Von Puttkamer died December 27, 2012.

“The Relationship between Urglaawe and Braucherei.” Hollerbeer Haven, Journal of Urglaawe, Braucherei, and Deitsch Wisdom, vol. 5, no. 1, Spring 2012, pp. 1, 5-6.
Available online as PDF at: http://urglaawe.blogspot.com/.
Examines the distinctions and connections between Urglaawe, “the continuation of the pre-Christian Teutonic faith as viewed within Deitsch culture today,” and the healing tradition of Braucherei.

Aurand, A. Monroe Jr. Wit and Humor of the Pennsylvania Germans: A Collection of Anecdotes, Stories and Witticisms — Some Old; Some New. Choicest Parlor and After-Dinner Stories. Lancaster, Pa.: Aurand Press (Privately printed), n.d. 32 pp., ill.
Title taken from cover; at top of page: Penna. “Dutch” Joke Book. Also from cover: By A. Monroe Aurand, Jr. Author of “Little Known Facts About the Amish and the Mennonites,” “Quaint Idioms and Expressions of the Pennsylvania Germans,” “Little Known Facts About Bundling in the New World,” &c. — Donated by Dale McIntyre.

Gruenwald, Myron. “The Emigrant’s Journey.” Die Pommerschen Leute, vol. 36, no. 1, Spring 2013, pp. 7-9, ill.
This article is adapted from Myron Gruenwald’s booklet “Two Worlds for Our Children,” 1985, pp. 30-32.
Describes conditions for nineteenth-century immigrants as they crossed the Atlantic crossing and traveled within the U.S.

Hübner, Andreas. “Germans of Louisiana. Off to Louisiana: Colonial Louisiana’s Early German-American History.” Society for German-American Studies Newsletter, vol. 33, no. 3, Dec. 2012, pp. [2-6].
Includes bibliographical references.
From the conclusion: “Instead of focusing on the sufferings and industriousness, or the contributions and success of the Germans [in 18-century colonial Louisiana], future scholarship should strongly concentrate on groups that are inextricably linked with the history of the Germans of Louisiana: African-Americans and American Indians . . .; utilize approaches such as Gender Studies to review images of women as ‘diligent housewives and mothers’; . . . [and] discuss the history of the Germans in Circum-Caribbean, Atlantic, and Trans-Atlantic perspectives. Different projects might, for example, investigate how notions of ‘Germans’ or ‘Germanness’ were produced in exchange between colonial and metropolitan agents and administrations; [or] explore how German farmers of colonial Louisiana were embedded into networks of French and Spanish mercantilism and capitalism.”

Keiser, Steven Hartman. Pennsylvania German in the American Midwest. Publication of the American Dialect Society , 96. [Durham, N.C., and London: Duke University Press, 2012]. vi,197 pp., ill.
Supplement to American Speech, vol. 86. — Includes bibliographical references (p. 175-194) and index.
Provides empirical details on the distribution of key linguistic variants in several Pennsylvania German-speaking communities in the Midwest and explores the internal changes, patterns of migration, and language contact that have led to the advanced geographic and social distribution of these features. — Contents: The history of Pennsylvania German: from Europe to the Midwest — Variation in Pennsylvania German: previous dialectological studies — Methods and community descriptions — The Midwestern vowel: monophthongization of “a” — Midwestern consonants: variation in the liquids “r” and “l” — Midwestern words: lexical and morphological variation — Regional identity, ethnoreligious ideology, and change.

——–. “Braucherei in the Urglaawe Context. Part 2a: Urglaawe Philosophy.” Hollerbeer Haven, Journal of Urglaawe, Braucherei, and Deitsch Wisdom, vol. 5, no. 3, Fall 2012, pp. 1, 5-7.
Available online as PDF at: http://urglaawe.blogspot.com/.
Seeks to explain the fundaments of Urglaawe as they arise from the Eddaic creation myths, with discussions of “Wurt” and “Urleeg.”

Stewart, Anne, and Mike Stewart. “Friedrich Bauer: Lutheran Pastor in a Free Thought Town.” The Journal (German-Texan Heritage Society), vol. 35, no. 1, Spring 2013, pp. 33-35, ill.
Includes bibliographical references.
“Comfort and Sisterdale were the heart of freethinking German West Texas. It was not until 1891 that a small group of women decided they would bring a church to their town. . . . [T]hey put out a call for a minister and Friedrich Bauer, Lutheran pastor, answered. He arrived with his wife, Maria, to take up residence and begin the process of establishing a church in a non-welcoming environment.”

Hansen, Greg. Agnes Melcher Family History. [94] pp., ill.
In July of 1843, Friedrich Melcher, his parents, and four siblings emigrated from Alt Rüdnitz on the Oder River to North America, settling first in a new German Lutheran community near Buffalo, New York. “After arriving in Buffalo, Pastor Ehrenström’s congregation wanted to continue to Wisconsin, where they had connections with other from the Ukermark region. Pastor Grabau asked that they stay, at least until Pastor Ehrenström could join them. The group decided to purchase three large areas of land that would suit their needs, based on the skills they brought with them from home. These became the communities of Bergholz, Walmow (later Walmore), and Martinsville [these three towns are now part of Wheatfield, New York]. Those that worked larger farms in Prussia formed Bergholz. The Walmore residents were farmers also, and being able to afford a bit more, purchase developed lots previously owned by Mennonite families. The Martinsville folks were craftsmen and river people, ‘Oderbruchers’ like the Melchers who had lived and worked along the Oder. They chose land along Tonawanda Creek so they could both farm and continue working river-based trades of fishing, net making, and boatbuilding.” In 1855, Friedrich’s parents, Johann Friedrich and Elisabeth Melcher, moved to Watertown, Wisconsin, joining a large community of Oderbruchers there. Friedrich and his wife Augusta remained in Martinsville through the Civil War, but in late 1878 or early 1879, they and their four surviving children moved to Grand Haven, Michigan. [“Slightly less than a century later, Friedrich Melcher’s great-grandson Robert Bickel and his wife Louise would return to western New York and raise their own family of nine children.”] Louise Lessien, the mother of Agnes Melcher, was born in Wheatfield, New York, but lived the majority of her life in Grand Haven, Michigan. She married Martin Melcher in 1888. Agnes Melcher was their third child, born in 1892. Agnes married Otto Johann Bickel in 1922. Provides impressions of the German communities in Grand Haven, Ionia, Grand Rapids, and Saginaw, Michigan.
Donated by Greg Hansen of Albuquerque, New Mexico, 2013.

No materials donated to this collection at this time.