The “peasant republican” spirit of many early German Americans is exemplified by the newspaper Der Deutsche Porcupein, published in Lancaster, Pennsylvania, whose 1794 masthead is shown here. The newspaper’s name was inspired by an English journalist and political commentator, William Cobbett (1763–1835), who wrote under the pseudonym “Peter Porcupine.” The image was considered an apt one for journalists of the time: the porcupine is by nature a passive creature that defends itself only when attacked,
and then with its sharp quills. Note that the angel flying over the porcupine is trumpeting “Preßfreyheit!” (freedom of the press). 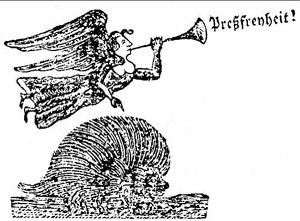