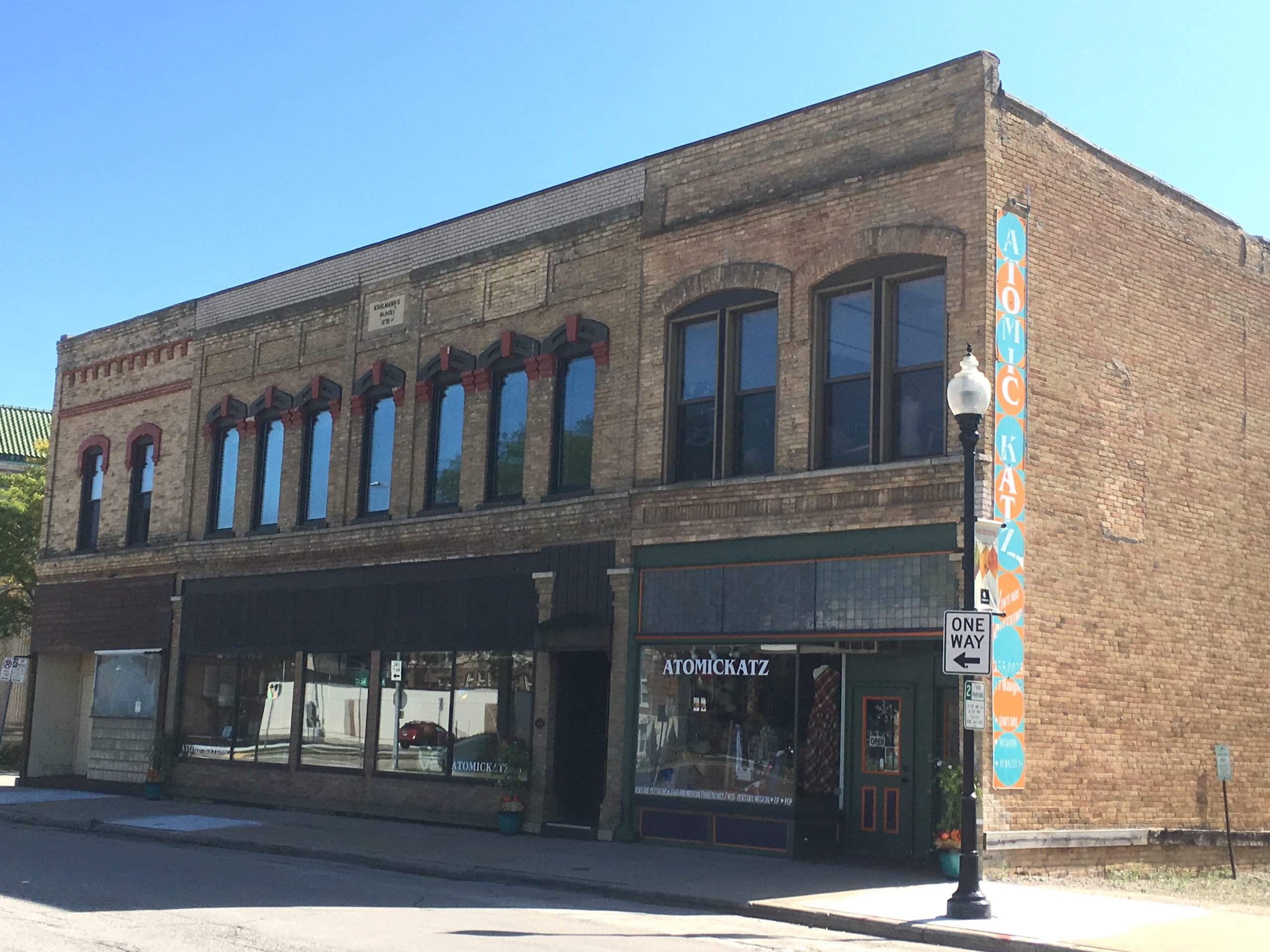 Built in 1875, the Kohlmann Building  at 21 Wagoo Avenue in Oshkosh (the current home of Atomic Katz vintage clothing and furnishings) still bears witness to the city’s rich German-language publishing industry. Brothers Charles and Valentin Kohlmann, both born in Germany, were leading publishers in Oshkosh and owners of the city’s first steam-operated press. Alongside their newspapers, they also printed the City Directory and school documents. The Kohlmanns published the city’s first German newspaper, the Anzeiger des Nordwestens, from 1852 until 1854, when they left Oshkosh for Sioux City. During their absence, Oshkosh was home to the Phoenix aus Nordwesten (1854-1857, published by Gustav Grahl) and the Oshkosh Deutsche Zeitung (1856-1859, issued by Theodore Frentz and others). The latter paper’s motto read, Das meiste Gute für die größte Masse (The most good for the biggest mass). When the Kohlmann brothers returned to Oshkosh in 1858, they launched Wächter am Winnebago (1858-1860), which was replaced by a weekly magazine, Deutsche Volksblätter (1860-1866). 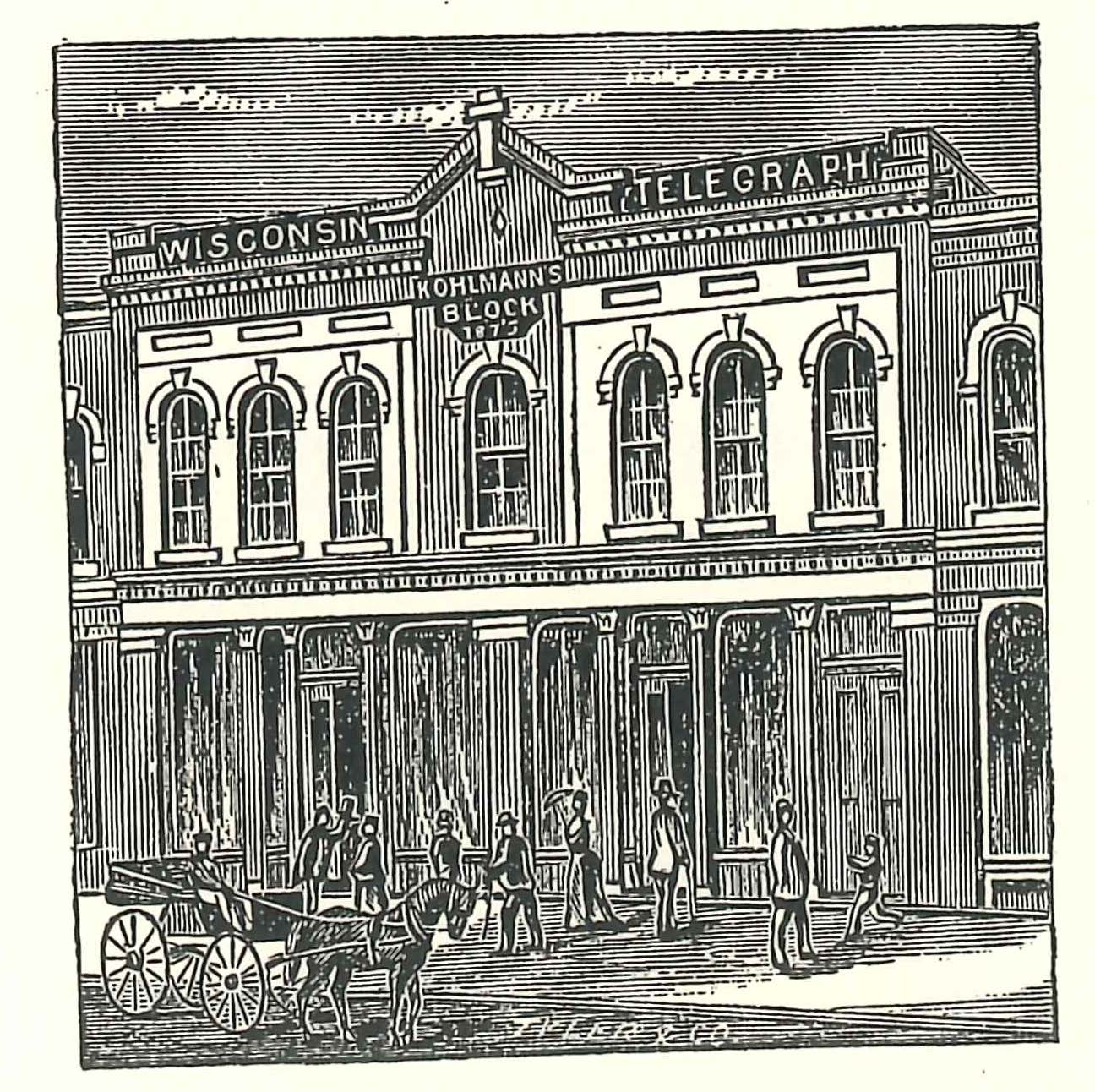 In October 1866, the Kohlmanns founded their weekly Wisconsin Telegraph, which became the tone-setting German-language newspaper of Oshkosh until 1920. It included a small-format Sunday supplement, Der Feier-Abend, featuring a serialized novel. The Kohlmanns sold the paper in 1885 to Col. Thomas S. Allen, who also published the Northwestern (with John Hicks), and his partner Julius Weidner. After Allen’s death in 1905, the paper continued under the banner of Allen and Weider until 1910, when publisher William F. Weber took over. (He also owned the Fond du Lac German papers Nordwestlicher Courier, 1871-1920, and Daheim, 1884-1918. Another short-lived paper, Der Oshkosh Reformer, appeared from 1899 to 1900.) The Telegraph continued to publish in German through World War I, but finally closed its doors on April 16, 1920. From 1905 to 1917, the Telegraph, which was published on Fridays, was complemented by a Tuesday paper, Das Dienstags-Blatt. The Wisconsin Telegraph included national and local news, extensive editorials and commentaries, cultural information (including sheet music of hit and classic songs), recipes and household tips, alongside fiction, serialized novels, and jokes. Advertisements (in English as well as German) document the commercial and cultural development of the city.

The publishers of the Telegraph described the character and intent of the newspaper in a regular promotion:

The Wisconsin Telegraph now covers twelve six-columned pages which cover the newest reports from both sides of the ocean and especially from the city, county, and the state. Like hardly any other weekly paper in Wisconsin. It contains unbiased, informative articles about politics, art, science, etc. Additionally, the Sunday paper Der Feierabend always contains a high-quality, exciting novel. […] Thanks to its wide distribution across the entire state and especially in Winnebago County, the Telegraph is an excellent medium of advertising.[…] Subscription price only $2.00 per year. (1889)

Unlike many German-American newspapers, the Telegraph survived World War I—it even managed to continue publishing in the German language throughout—but in 1920, it, too, closed its doors. With an editorial in the final issue of April 16, 1920, Wisconsin Telegraph publisher W. F. Weber looked back:

A Word of Farewell to Our Readers

About 51 years ago, the Wisconsin Telegraph first appeared. There were many Germans in the city and in the region, and for the most part, there were German newspapers in just the big cities. Therefore, the response was enthusiastic when the Telegraph appeared. The paper quickly found a place in the families of immigrants who did not speak English, and it soon became an intimate friend. The editors, the Kohlmann Brothers, were good Germans, and they had not gone into the newspaper business for profit. They had another business that fed them. Through the German newspaper, the influence of the Germans in politics grew, and the politicians spoke of their German fellow citizens with the greatest respect in public life.

After the death of the Kohlmann Brothers, the paper went into the hands of Allen and Weidner, who led it until the year 1910. In that year, the current publisher took over the paper according to their wishes and produced it until now in connection with his newspaper that appeared in Fond du Lac.

Even if the publishing yielded no profit, we stuck to it and it worked until war broke out and made the position of German newspapers much more difficult. As the German papers attempted to hinder the war, which they considered detrimental for the nation, they were denounced as enemies of the country and even portrayed as traitors by the Super-Patriots, those people who didn’t want to serve in the war themselves, but instead shoved the burden onto others while screaming “hurrah.”

Through a long-term, systematic agitation by the British and their tools in this country, the good will between the Anglo-Americans and the immigrants from Germany was disturbed and the German-born citizens who had helped build the country were classified as traitors and open season was declared on them. The main front of the Anglomaniacs was directed primarily against the papers appearing in German; every imaginable hindrance was erected for them, and the editors who spoke a free word and demanded the rights guaranteed by the Constitution for them and the German-born were incarcerated. The fanatical mob abused people who had done nothing wrong, and the tradesmen withdrew their advertising business from the German newspapers, and in many cases forced them to close the papers down. While the earnings were being reduced, the costs grew, and most of the papers had to reduce their size in order to reconcile income and expenses.

Our experience was like that of most German newspapers: we had to work at a loss, yet we hung on for as long as possible. But now, after 42 years of concentrated work in the service of enlightenment, after our weakened health condition forces us to lay down the pen and we can no longer manage the work alone, we must give up the newspaper business. And so, to the readers of the Wisconsin Telegraph we express our thanks for their loyal support, and we say to them: Farewell!

The first number of the new German paper, the “Anzeiger des Nordens,” (Northern Advertiser) has been laid upon our table. It is neatly printed, and creditably got up, and is edited with much industry, and apparently with fair ability. Our German is very limited, and by no means good, but an enterprise of this character, started among us, is of deep interest to the whole community, and we have therefore made a stagger at a translation of its leading article. (Read the translation here.)

PHOENIX AUS NORDWESTEN. — This is the name of a new German paper just started in the city, by GUSTAVUS GRAHL. It is in favor of the Republican platform and ticket. We can not read it, but it is a good looking, well printed sheet and will doubtless be well sustained by our German population. We hope its editor will be successful in very thing except his efforts to abolitionize his fellow country men.