German-speaking immigrants helped settle and build the city of Oshkosh. Still today, over 48% of the Oshkosh population claims German heritage. German-speaking immigrants had come here in three waves: from the rural Prussian province of Pomerania in the early 1850s, from villages along the border between Bavaria and Bohemia (part of the Austro-Hungarian Empire) a few years later, and from German settlements along Russia’s Volga River around 1900.

Those who arrived in the 1850s settled on the city’s south side. They were the immigrants from Bavaria and Bohemia  who became known as “Highholders,” and those from Pomerania who were known as “Plattdeutschers” or “Low Germans.” While the origin of the word “Highholder” is not quite known, “Plattdeutscher” clearly refers to the dialect of the German coastal areas (low lands) that the Pomeranians spoke. Later, Pomeranians settled on the north side as well, in a district called “Nordheim,” then outside the city limits, and annexed in 1950.  Volga Germans, meanwhile, became known as the “West Siders.” A historical marker in Rochlin Park, dedicated in 1991, memorializes this group.

These various German-speaking immigrants played a large role in Oshkosh’s woodworking industry, were leading tradesmen in the city, and operated the many breweries, stores, and taverns that characterized the regional culture. While they were all “Germans” to the Yankees around them, there were large differences between them. They came from different countries, spoke different dialects, went to different churches, brought different traditions, and often did not agree with each other, as in the conflicts between Highholders and Plattdeutschers described below.

Oshkosh English-language papers in the early years, were largely positive about the arriving German immigrants.

Our Immigration — We were recently out from Milwaukee on the south Janesville road, and notwithstanding the tight times, the road was literally covered with travelers. We were obliged to pass several taverns and to travel ten miles after it was time to put up, before we could find a house that could take us in. At one tavern where we made sure of stopping, we found between eighty and ninety already put up. […] The Sheboygan papers tell of the vast immigration at that port… Click here to continue reading.

Our German Citizens — Sometimes when we have visited the County, we have been edified by hearing our goodly village decried at a great rate. “A rough, drinking, brutal place,” is the good name they circulate about us, and then they add “there are so many Dutch there that it is no wonder!” Now we will say one word about this. We have a great many German Citizens here, but a more orderly, quiet, and civil class of citizen no place was ever honored with. Click here to continue reading.

Immigration Oshkosh — The Milwaukee Sentinel says that a large number of immigrants from Germany are, or soon will be, on their way to this country, and that many of them will come directly to Wisconsin. We are glad to hear it, and we hope some of them will find their way to the western side of Lake Winnebago. And in this connection, we wish to put in a word for Oshkosh. Click here to continue reading.

The rivalry between “Highholders” and “Lowlanders” has become part of Oshkosh lore as described in the following two articles from the Oshkosh Daily Northwestern. 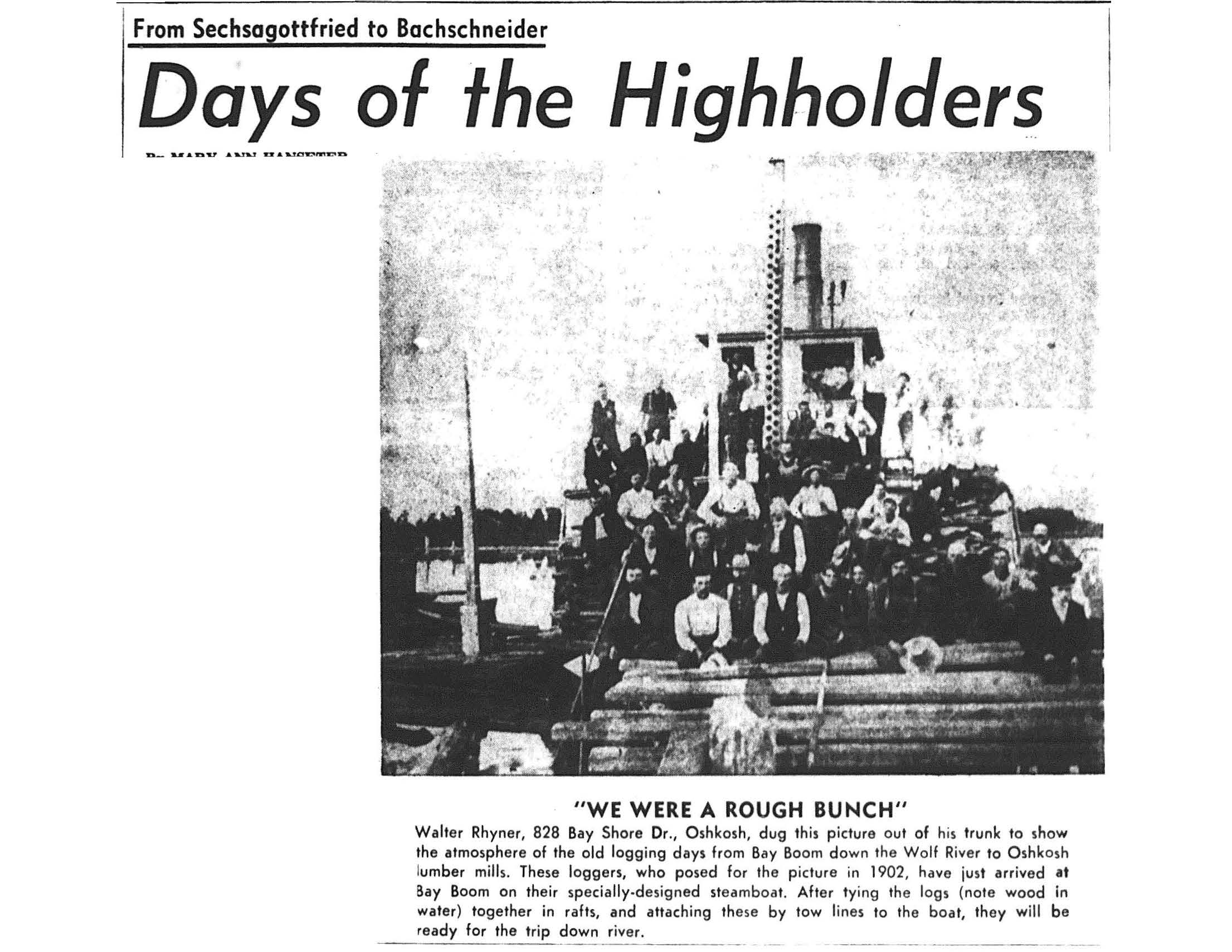 Sechsagottfried and Schleimahans, Bachschneider, and Bekersep — these were some of the colorful characters who made the early days of Oshkosh’s southside entertaining to live in and entertaining to remember. Click here to continue reading

‘Highholders,’ ‘Lowlanders,’ Feud Combatants — The kids hollered my-dad-can-lick-your-dad in German dialect during the old days on the south side of Oshkosh. The “highholders” and the “lowlanders” feuded regularly, with the youngsters working up to a huge fight on Oregon Street every fall. Click here to continue reading.